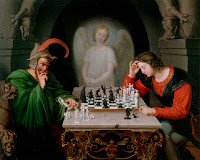 “The King is the most important piece. When he is trapped, his whole army loses. The King can move one square in any direction. The main goal of chess is to checkmate your opponent’s King. The King is not actually captured and removed from the board like other pieces. But if the King is attacked (‘checked’) and threatened with capture, it must get out of check immediately. If there is no way to get out of check, the position is a ‘checkmate,’ and the side that is checkmated loses.”

We all know what the game of chess involves. Now there used to be a painting in the Louvre art museum called "Checkmate", painted by Friedrich Moritz August Retzsch. It is now in private hands after being sold at Christie’s in 1999. This painting depicts 2 chess players, one is satan whom appears arrogantly confident, and the other player is a man who looks forlorn. If satan wins, he gets the man's soul.

According to legend, a chess champion visited the museum once and after studying the painting, noticed that the arrangement of the chess pieces were incorrect. According to him, the devil who thought he was winning, was in fact not winning. The man, who thought he was losing, was winning, because according to the pieces left on the chessboard, his king had one more move left, which would make him the winner of the game!

He called the curator and they determined that the title didn’t fit the scene because the forlorn-looking player actually has the ability to defeat his opponent, though he obviously doesn’t realize it. The painting is a lie. His king can still make another move!

- A little boy with two fishes and a few loafs of bread, sees that thousands of people needs food. It looks like checkmate, but it is a lie, our King has another move left! They collected twelve baskets of leftovers afterwards!

- Daniel gets thrown into a lion’s den full of hungry lions. It looks like checkmate, but it is a lie, our King has another move left!

- The woman by the well is about to be killed by angry men with stones. It looks like checkmate, but it is a lie, our King has another move left! He tells her to go and not sin anymore.

- The murderer next to Jesus on the cross thought it was the end, yet he still repented. It looks like checkmate, but it is a lie, because the King has a move left and says: Today you will be in Paradise with me.

- On Good Friday the people were screaming: Crucify Him! They mocked and hit Him, spit and tortured Him and nailed Him to the cross. They said He could save others, but not Himself. It is over. Checkmate. Satan smiles as everybody leaves thinking God is dead. But Jesus still has a move left! Come Sunday and Jesus rose from the dead! Our King had another move left!

- We think our country is a mess. Farm murders and violence everywhere. People lose their jobs, marriages gets destroyed, moral values are non-existent. You get scared and feel lost. You are looking for direction but end up on the wrong path. It looks like checkmate, but it is a lie, do not fear, the game is not over.
Our King still has one move left! Our lives and future are in His hands. You have been bought with His blood - a very expensive price, and received amazing grace.

1 Peter 2:24-25 …who Himself bore our sins in His own body on the tree, that we, having died to sins, might live for righteousness—by whose stripes you were healed. For you were like sheep going astray, but have now returned to the Shepherd and Overseer of your souls.

If you found this interesting, read our other blogs, or visit our website: www.whatafriend.co.za

*I heard this story and after doing some investigation, I found that the original story was published in a chess magazine in 1898/99. Various sermons were based on it afterwards.

Welcome to What a Friend we have in Jesus Christian blog.
We would like you to participate in our conversations. You can comment or "like" our articles, subscribe to our weekly e-mail, or just use this for Bible Study.
We have lighter pieces and some deeper articles, to cater to your every need. Look in "categories" on the right hand side for topics.
If you would like to know more about us, click on the "who are we" tab, or on the "join us" tab if you would like to know how to join us.

Our Most Popular Posts this week

For God so loved the world, that he gave his only Son, that whoever believes in him should not perish but have eternal life.

Promote your Page too

Is your Christian mode ON or OFF?

I will instruct you and teach you in the way you should go; I will counsel you and watch over you.